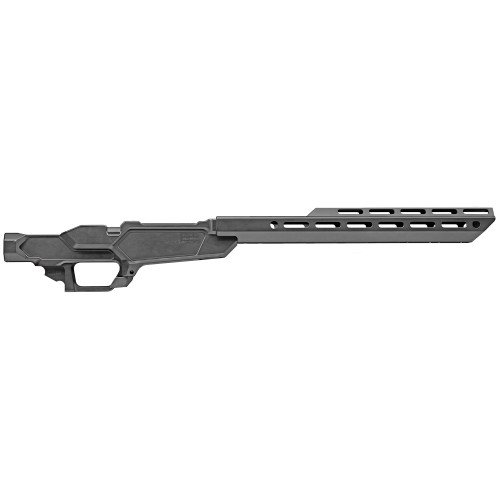 Heatseeker is an innovative, affordable chassis system for your bolt action rifle, allowing you to easily upgrade a traditional factory rifle stock for improved versatility and a sleek, modern appearance.

This 1lb, 3 ounce chassis is machined from billet (solid block) high-strength 6061-T6 aluminum and includes a 10 ounce, 14" handguard cut from a unique extrusion shape exclusive to Sharps Bros. Both the chassis body and the handguard are finished in a matte black Cerakote. The handguard features MLOK slots on 4 sides for various attachment options (light, bipod, night vision, ARCA rail...) and two quick disconnect fittings per side for sling attachment.

Add your grip of choice with Heatseeker's standard AR15 grip interface - we're partial to their Brazilian Cherry grip & handguard panel set (as shown in the photos to the left). Heatseeker's built in AR buffer interface allows you to further customize your rifle with your preferred AR15 type stock.

This offering is for the Rem700 pattern Short Action.  With Heatseeker you can easily and affordably convert your Rem700 pattern short action into an enhanced magazine fed system.  Heatseeker's sleek contemporary design will completely transform the look of your rifle, with no need to visit a gunsmith: their simplified instructions and functionality makes installation a breeze.

This Heatseeker model for the Rem700 pattern short action is compatible with AICS short action magazines from Magpul and Accuracy International.  The Magpul version is recommended, with the following notice:

Magpul's AICS pattern PMAG has been updated with a new spring & follower. The follower now features an enlarged ridge for improved cartridge support and cycling.

New Magpul magazines have a tan follower like you see on the left and include all Magpul improvements for the AI pattern magazine.  This is the magazine they recommend for Heatseeker, for the best reliability and performance.

Notice the 'bump' on the follower, as compared to the version on the right. While you may find other Magpul AI magazines with a similar raised element as the tan follower (example shown in the middle mag in the photo below), Sharps Bros advises avoiding the older version shown on the right, which may have cycling issues. 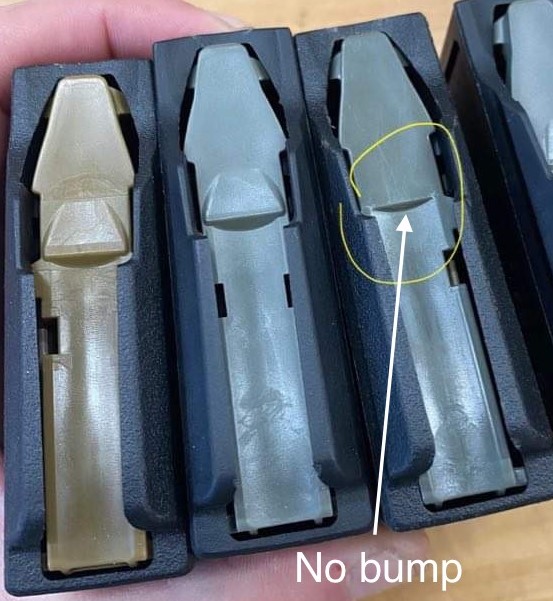