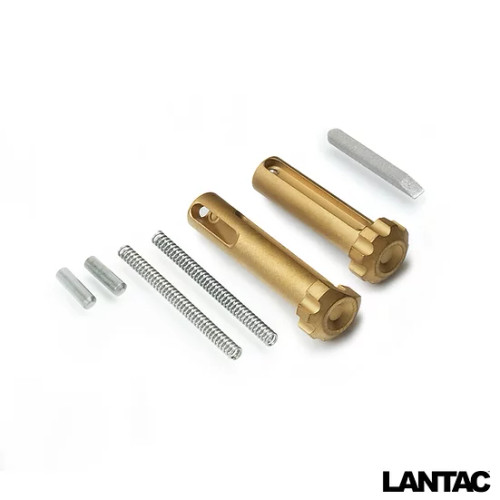 Precision machined on Swiss style turning centers Lantac's Ultimate Takedown Pin sets are manufactured from the highest quality materials to the highest standards.
They ship complete with their 3D printed rear pin removal tool (RTT™).
The Patent Pending UPS™ (Ultimate Pin Set) allows the user to install and remove an AR15 Pivot Pin without the use of a tool.
The unique design incorporates a ramped groove that holds the detent in place at the time of installation.
Pins feature Patent Pending aggressively crenulated heads for improved grip, this facilitates easier removal of the pin from the receiver.
QUICKSAFE™
Lantac's UPS™ Pin system has a built in safety feature that can be utilized by anyone wanting to make it difficult for an Upper Receiver to be fitted to a Lower Receiver.
To render a lower receiver inoperable the user can quickly remove the front Pivot Pin (Spring & Detent) and insert it through the rear Takedown pin hole from
the other side of the receiver. Then remove the rear Takedown and allow the Pivot Pin to retain its detent.
If the pin is rotated so that the detent registers with the groove on its end then it becomes impossible to remove the pin without removing the castle nut and end plate.
It is now impossible to mount an upper receiver group to the lower and have a functioning assembly.
Pins are manufactured from 17-4PH stainless steel in H900 condition and then QPQ TiN finished.